Buy Knockabout titles at all good book shops or on the Knockabout eBay Store. Digitally on: SEQUENTIAL • Kindle

At Knockabout we publish around a half-dozen titles a year, sometimes a few more, along with regular reprints of classic titles. Bookmark this page for regular updates on our new titles or follow us on Twitter or Facebook. 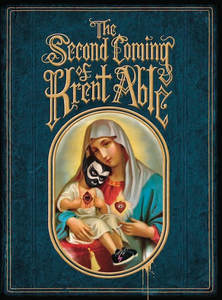 Krent Able returns in the follow up to his Big Book of Mischief. Featuring mind-warping comics and stunning illustrations from Vice, The Guardian, NME and more.

"Horrific and hilarious all at once." — The Comics Journal
"Wickedly Disrespectful!" — Michael Faber, The Guardian
"Hyper-detailed, hilarious and grotesque." — ​Pitchfork

For more than a century, Alice, Wendy and Dorothy have been our guides through the Wonderland, Neverland and Land of Oz of our childhoods. Now like us, these three lost girls have grown up and are ready to guide us again, this time through the realms of our sexual awakening and fulfillment. Through their familiar fairytales they share with us their most intimate revelations of desire in its many forms, revelations that shine out radiantly through the dark clouds of war gathering around a luxury Austrian hotel. Drawing on the rich heritage of erotica, Lost Girls is the rediscovery of the power of ecstatic writing and art in a sublime union that only the medium of comics can achieve. Exquisite, thoughtful, and human, Lost Girls is a work of breathtaking scope that challenges the very notion of art fettered by convention. This is erotic fiction at its finest. -- a 352-page, full-color hardcover graphic novel (Shrink Wrapped), 9” x 12”, ADULTS ONLY (18+) 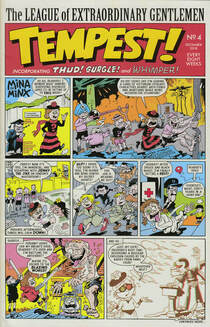 ​Legendary swords clash atop the Paris Opera in 1913, while almost a century later a declining London witnesses assassination attempts, summit meetings in Haggerston Park, and the catastrophic return of a 1960s super-adventurer.

Elsewhere, in the four-dimensional territories adjacent to the North Pole, a lost Shakespeare play sees its first and last performance, while Queen Gloriana’s conjuror finally reveals the nature of his five-hundred-year-old game.

​Topping off an already heady mixture, this issue’s classic Seven Stars reprint depicts our halcyon heroes as “Captives of the Creepyverse”, another reason not to miss the unfolding of Moore and O’Neill’s fulgurant finale in issue four of The League of Extraordinary Gentlemen, Volume IV, The Tempest.​ 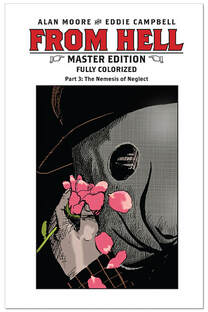 Experience FROM HELL as never before: fully restored and in colour for the first time!

​"My all-time favorite graphic novel … an immense, majestic work about the Jack the Ripper murders, the dark Victorian world they happened in, and the birth of the 20th century." — Warren Ellis, Entertainment Weekly

Five unsolved murders. Two of the greatest creators in the history of comics. One sprawling conspiracy, one metropolis on the brink of the twentieth century – and one bloody-minded Ripper ushering the London of Hawksmoor and Blake towards the modern age of terror.

“The most dramatic change is the colour, of course,” says Eddie Campbell. “I prefer the term ‘colorizing’ to ‘colouring’ since I’m not simply painting within the black lines, but reconceiving every panel to suit a full-colour world. But I’ve also gone through and fixed small errors and minor flaws that have haunted me for decades. Ultimately the result is my equivalent of a ‘director’s cut’ of From Hell.” 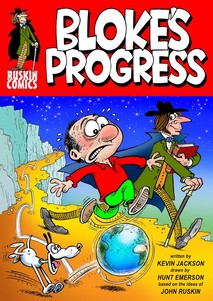 ​John Ruskin, (1819 – 1900) was an art critic – possibly the greatest in any language. Yet his concerns were by no means confined to art. He was a sharp-eyed observer of nature, he had a fascination with architecture and he developed strong ideas about work, wealth and money. He was what we would now call a “holistic” thinker. Thinking holistically obliged Ruskin to examine the society in which he lived. The conclusions he reached made him many admirers (and some enemies). He had impressive fans, including Leo Tolstoy and Marcel Proust. He inspired all sorts of reformers and idealistic politicians, including Gandhi, who said that reading Ruskin on a train one night changed his life. Ruskin was more than just a best-selling writer: lots of people regarded him as a kind of guru or latter-day prophet.
​
Darren Bloke is an ordinary, hard-working stiff until a lottery win changes – and ruins – his life. He squanders his windfall and loses everything but his beloved dog, Skittle. Then he is visited by the spirit of Ruskin, who shows him the true meaning of Wealth – not how to acquire it, but what is the right way for an honest human to deal with it. Further visits from Ruskin’s spirit take him on a journey into Perception – how to look at the world through a more creative filter, and finally, he learns from Ruskin the true value of Work, and how it can enrich his life above and beyond a pay-packet. Darren discovers the meaning of Ruskin’s favourite saying – There is no wealth but Life.
​
This strange comic book is part satire, part economic and philosophical treatise, part love story, part political argument, part psychedelic craziness, and always funny. And, in Skittle, Bloke’s Progress has one of the most loveable dogs in comics! 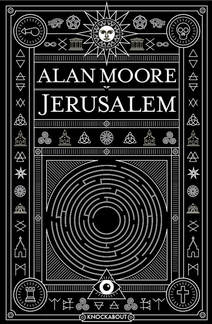 ​“Jerusalem slips in and out of time, embracing Charlemagne, Einstein and Thomas Becket. You’ll emerge dazed — and dazzled by its brilliance.” – The Spectator

​Among saints, kings, prostitutes, and derelicts, a timeline unravels: second-century fiends wait in urine-scented stairwells, delinquent spectres undermine a century with tunnels, and in upstairs parlours, labourers with golden blood reduce fate to a snooker tournament. 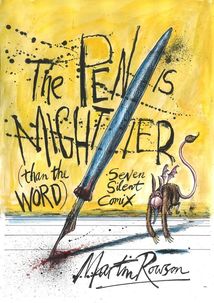 ​Wordless comics on the state of the world from the UK’s leading political cartoonist, whose work has appeared in every major newspaper, except The Sun, but only because they never asked him. Martin Rowson’s latest book tackles the state of the world through seven ‘silent’ (wordless) comics. In his iconic style he delves into such eternal woes as lost love, faltering creativity, inequality, gluttony, despair, decay, death and the uncertain hopelessness of life everlasting.

​Alongside his political work he has written and drawn comic book versions of The Waste Land, Tristram Shandy, Gulliver’s Travels and The Communist Manifesto as well as Snatches, a novel, and Stuff, a memoir about his late parents which was longlisted for the 2007 Samuel Johnson Prize. His other books include The Dog Allusion: Gods, Pets and How to be Human and Fuck: The Human Odyssey and The Coalition Book, a collection of his most scathing cartoons about the last government.
​
“He reminds me more of Boswell, Searle, Hoffnung, Tidy and Steadman as well as the brilliant Maurice Richardson, Patrick Campbell and other inventive English humourists… I doubt very much that a funnier book will appear this decade.” – Michael Moorcock, The Guardian on Snatches

“A masterclass in comics layout that also heaves with visual gags and crackbrained codes to break.” – The Telegraph on Gulliver’s Travels