The New York Times bestseller from the author of From Hell, The League of Extraordinary Gentlemen and V for Vendetta finally appears in a one-volume paperback.
​
Begging comparisons to Tolstoy and Joyce, this “magnificent, sprawling cosmic epic” (Guardian) by Alan Moore—the genre-defying, “groundbreaking, hairy genius of our generation” (NPR)—takes its place among the most notable works of contemporary English literature.

​In decaying Northampton, eternity loiters between tower blocks. Among saints, kings, prostitutes, and derelicts, a timeline unravels: second-century fiends wait in urine-scented stairwells, delinquent specters undermine a century with tunnels, and in upstairs parlors, laborers with golden blood reduce fate to a snooker tournament. Through the labyrinthine streets and pages of Jerusalem tread ghosts singing hymns of wealth and poverty. They celebrate the English language, challenge mortality post-Einstein, and insist upon their slum as Blake’s eternal holy city in “Moore’s apotheosis, a fourth-dimensional symphony” (Entertainment Weekly).

​This “brilliant . . . monumentally ambitious” tale from the gutter is “a massive literary achievement for our time—and maybe for all times simultaneously” (Washington Post).

"Jerusalem slips in and out of time, embracing Charlemagne, Einstein and Thomas Becket. You’ll emerge dazed — and dazzled by its brilliance." --The Spectator

“A hymn to Northampton, a commemoration of the lost people and places of his childhood. . . . Epic in scope. . . . The novel has the immersive imaginative power of fable; it also deepens Moore’s career-long investigation into the kind of collapsed rationality that borders on genius and might, very easily, be misdiagnosed as madness.” — Nat Segnit, The New Yorker

“Jerusalem is Moore’s apotheosis, a fourth-dimensional symphony of his own beloved city. . . .A love song for a vanished neighborhood, and a battle cry for an embattled class left behind by centuries of powermongers and tyrants and corporations and New Labour. . . .Jerusalem soars high on the wings of the author’s psychedelic imagination. His bighearted passion for his people, his city, and the whole monstrous endeavor of the human condition is infectious. I’m not sure there’s a God, but I thank Her for Alan Moore.” — Entertainment Weekly

“Epic in scope and phantasmagoric to its briny core. . . .The prose sparkles at every turn. . . . It’s a difficult book in all the right ways in that it brilliantly challenges us to confront what we think and know about the very fabric of existence. . . . A massive literary achievement for our time—and maybe for all times simultaneously.” — Andrew Ervin, Washington Post

“Unquestionably Jerusalem is Moore’s most ambitious statement yet — his War and Peace, his Ulysses. The prose scintillates throughout, a traffic jam of hooting dialect and vernacular trundling nose-to-tail with pantechnicons of pop culture allusion. Exploring a single town’s psychogeography with a passionate forensic intensity, Moore makes the parochial universal, the mundane sublime and the temporal never-ending.” — James Lovegrove, Financial Times
“A magnificent, sprawling cosmic epic.” — Guardian

“Moore, you genius. . . .A testament to Moore’s skill at genre juggling, at cultivating a sense of awe at the universe’s frightening expanse and its beautiful mysteries.” — Zak Salih, The Millions

“Rewarding—a novel that refuses to fit neatly into any classification other than the unclassifiable.” — Ron Hogan, Dallas Morning News

“Moore’s prose is rich and complicated. . . .Once you slip into the rhythm of it, it is also poetic, insightful, and beautiful. . . .There are insights, revelations, and joys that would come from successive readings. It is possible that scholars will be picking this apart for years to come.” — Wayne Wise, Pittsburgh Post-Gazette

“Staggeringly imaginative…bold readers who answer the call will be rewarded with unmatched writing that soars, chills, wallows, and ultimately describes a new cosmology. Challenges and all, Jerusalemensures Moore’s place as one of the great masters of the English language.” — Publishers Weekly (starred review)

“Mind-meld James Michener, Charles Dickens, and Stephen King and you'll approach the territory the endlessly inventive Moore stakes out in his most magnum of magna opera. . . . Many storylines dance through Moore's pages as he walks through those humid streets, ranging among voices and moods, turning here to Joycean stream-of-consciousness and there to Eliot-ian poetry ("Their gait resembling the Lambeth Walk/While in the upper corners of the room/Are gruff, gesticulating little men"), but in the end forging a style unlike any other. Magisterial: an epic that outdoes Danielewski, Vollmann, Stephenson, and other worldbuilders in vision and depth.” — Kirkus Reviews (starred review)

“For his latest work, Moore turns in a sprawling, million-word saga blending fantasy and historical fiction set roughly in the Northampton, England, neighborhood in which he grew up. . . . [Moore’s] fans will doubtless find much here to ponder and delight in.” — Booklist (starred review)

“[Jerusalem] is a story about everything: life, death, the afterlife, free will, famous Northamptonians (John Clare, Oliver Cromwell, Philip Doddridge) rubbing elbows with prostitutes and drug addicts over time and space. It is about how, no matter what happens in life, we all go to the same place when we die; how everything, literally everything, is determined by four angels playing a game of snooker. It is confusing, hilarious, sad, mind-blowing, poignant, frustrating, and one of the most beautiful books ever written. More of a work of art than a novel, this book simply needs to be read.” — Library Journal (starred review)

•••
​
Available at all good bookshops including:

A limited run of the paperback edition with cover by Alan Moore is also available. 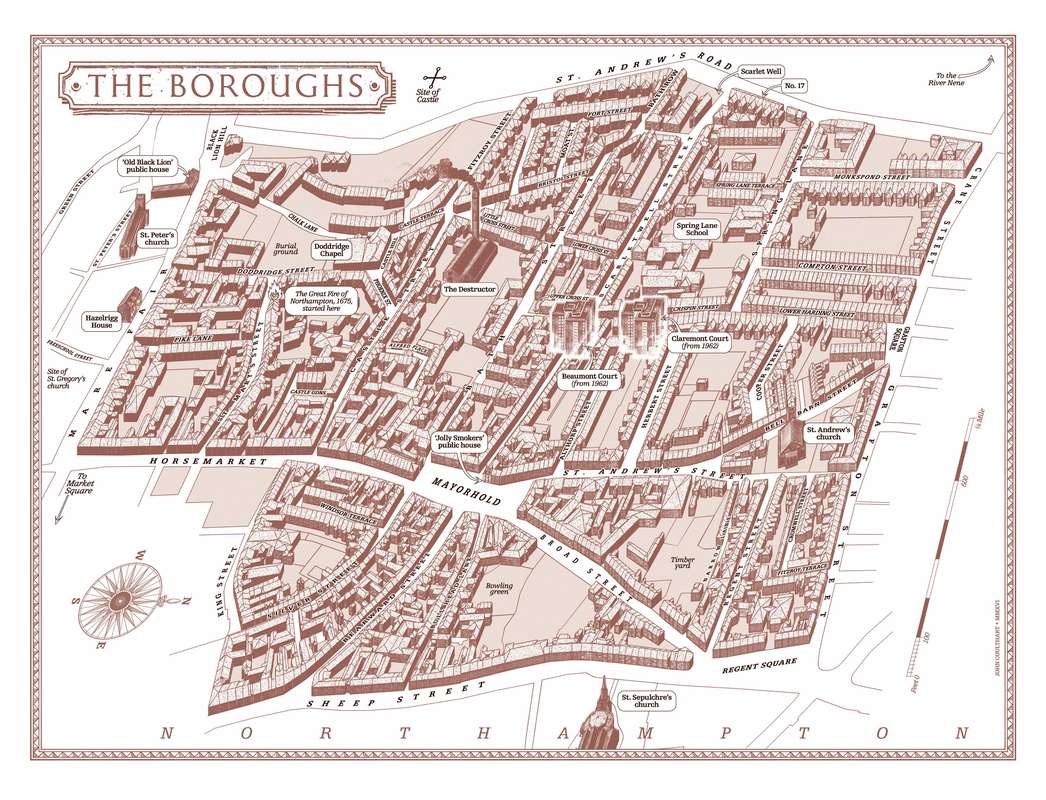